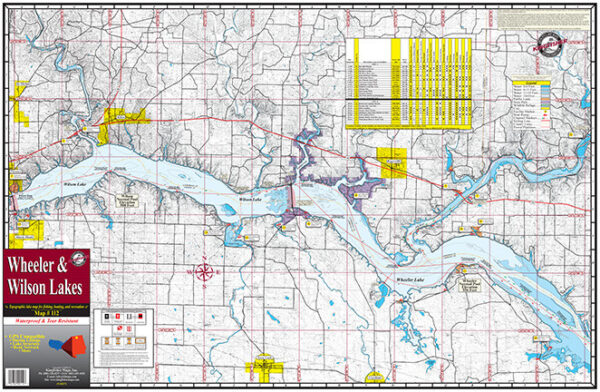 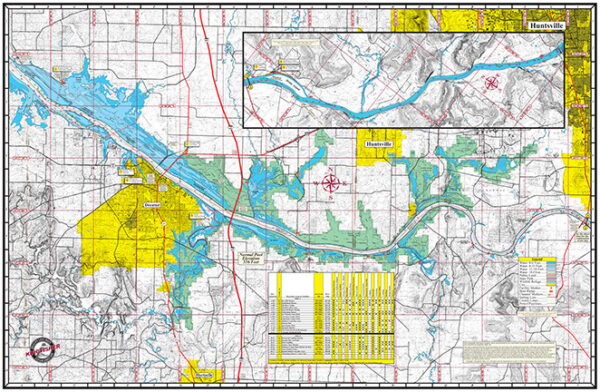 Wheeler & Wilson Lake, AL., 23″x35″. Two-sided. Scale 1:61,428. Waterproof and Tear Resistant! Wheeler Reservoir is located in north central Alabama half way between Birmingham and Nashville. Alabama’s second largest is one of TVA’s lakes and stretches 60 miles from Guntersville Dam to Wheeler Dam near Rogersville. The upper end of the reservoir is a run-of-the-river reservoir as it goes past Huntsville and begins spreading out near Decatur. Stump flats, weed beds, and creek channels are popular locations in the middle section. The lower end has many steep banks and long points. Bass fishing is the most popular fishery in Wheeler Reservoir. Largemouth bass are the primary species, but smallmouth bass are common from Decatur to the west end, especially from Elk River down. The northern strain of spotted bass are common too, and are primarily near the main channel. Wilson Reservoir is located in northern Alabama near the towns of Florence and Muscle Shoals. Wilson Dam is the only neoclassical-style dam in the TVA system, integrating themes of ancient Roman and Greek architecture into the modern structure. The construction of Wilson began in 1918, a year after the United States entered World War I. The reservoir of Wilson Lake extends upstream for 15 miles to Wheeler Dam and covers 15,500 acres and 166 miles of shoreline. Fishing include Largemouth bass, smallmouth bass and catfish.